“Conservation Metrics, a company based in Santa Cruz, California, develops software designed to differentiate between the sounds that scientists want to hear, like the cheeps and chirps of bird chatter, and everything else. It’s the same type of voice recognition analysis that smartphones use when they ‘listen’ and talk back to you – and as with your cellphone, the challenge for the software is the sheer volume of background noise.

“It’s like Siri constantly trying to figure out what someone’s saying, in the middle of Grand Central Station, on speaker phone,” said Matthew McKown, CEO of the company.

Check out one of the many posters/talks featuring our work presented at the 2015 World Seabird Conference in Cape Town, South Africa: 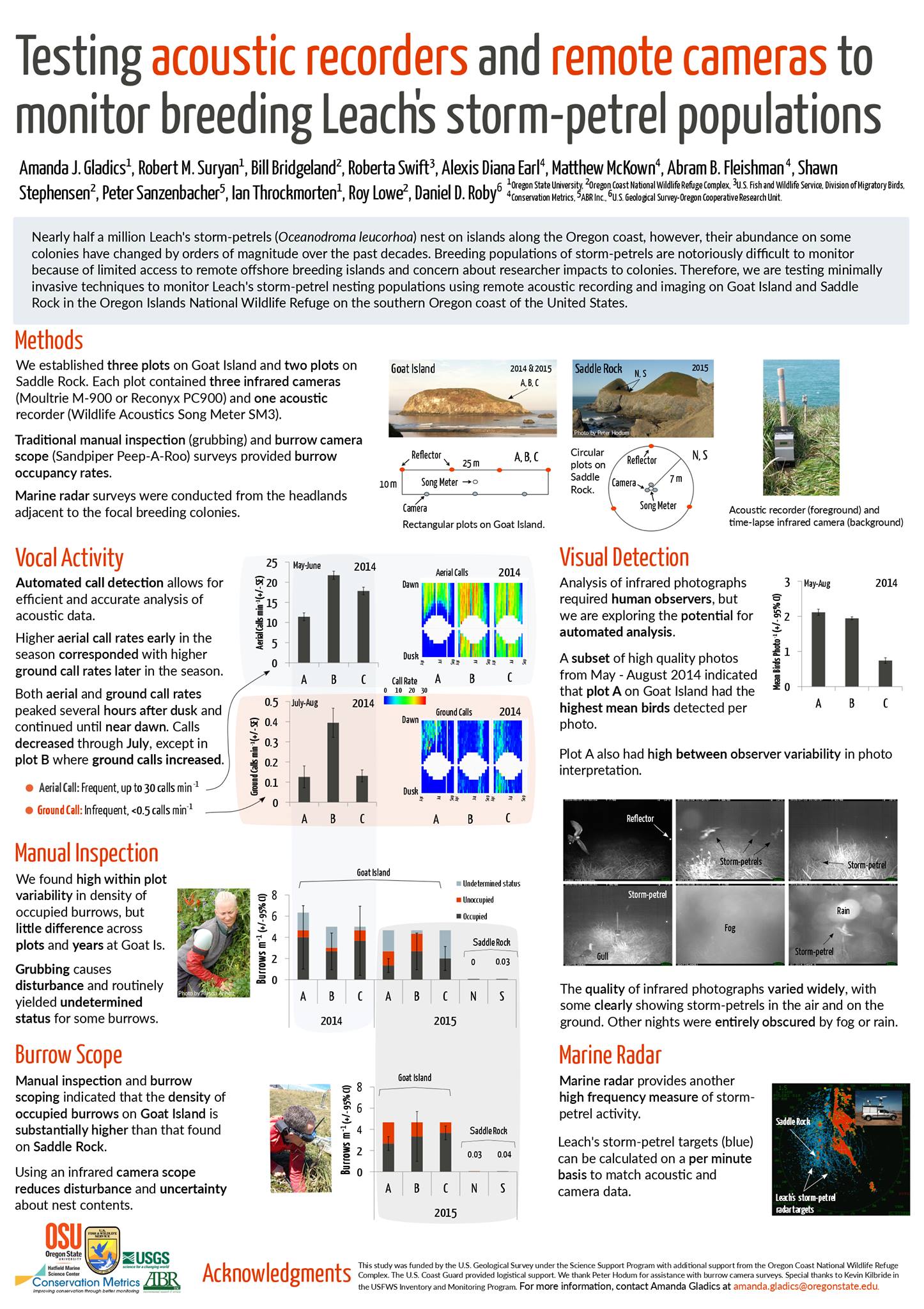 What we do and why it matters

… explained by David J Klein at the 2015 Strata+Hadoop Conference:

Last week CMI celebrated #BatWeek by attending the North American Society for Bat Research (#NASBR) meeting in Monterey. Pictured here, CMI Analyst, Alexis Diana Earl, and collaborator, Winifred Frick, stand with their poster at the conference. Bats play important ecological roles and are currently facing a variety of serious threats including habitat destruction, fatalities at wind and solar farms and widespread disease. Long term monitoring and measuring management action effectiveness is crucial for the conservation of these sensitive mammals. It was exciting to see so many talks about new, powerful methods utilizing various forms of remote sensing technology to help solve this important problem. 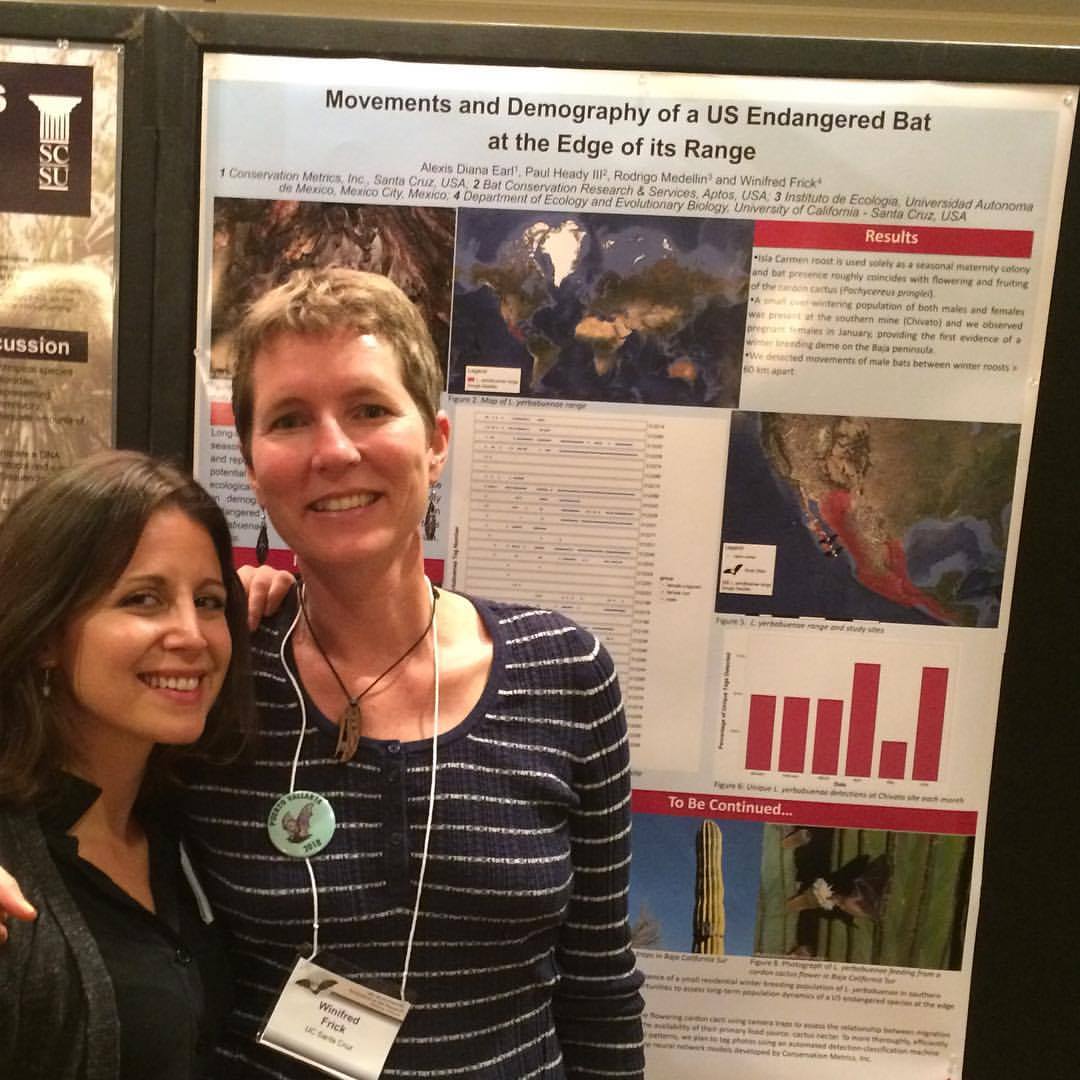 Take a walk with us and journalist Jody Avirgan through the San Vicente Redwoods as we discuss how remote sensing technology and machine learning are helping to save threatened species: 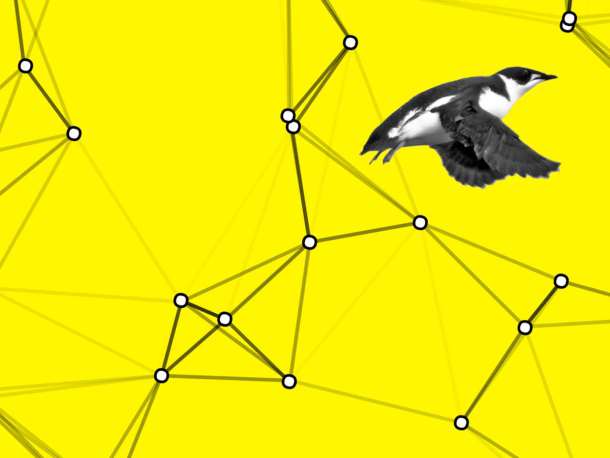 “The marbled murrelet is an enigma. It wasn’t until the 1970s that biologists discovered where the chunky brown-and-white bird made its home, and even then it was by accident: A tree-climber found a murrelet chick at the top of a redwood. Most other bird habitats had been mapped for centuries.

But who would have thought to look for a sea bird’s nest miles away in the middle of an old-growth forest?

And it’s elusive. California birders can go a lifetime without seeing one. Every day at the break of dawn, the murrelet zips down from the redwood forest hills, where it lives, to the ocean, where it feeds. It then returns under the cover of darkness. See the murrelet on its dawn commute here?

Or maybe not? That’s where big data helps.

Using remote acoustic sensors and machine learning to analyze the audio, biologists are now better able to track populations of species that were previously hard to monitor. With a threatened species like the marbled murrelet, that can make a huge difference. The better the data on its population and nesting patterns, the better our understanding of how its habitat is threatened, and the more effective conservation efforts can be.

On this week’s episode of our podcast What’s The Point, we go on a hike in the redwood forests north of Santa Cruz, California, with Matthew McKown, head of Conservation Metrics, a company using data to improve conservation efforts.”

CMI at the 2015 Bloomberg: Data For Good Exchange

CMI’s David J. Klein and Matthew McKown discussed deep learning for large scale biodiversity monitoring at the 2015 Bloomberg: Data For Good Exchange and were also selected to speak at the Strata + Hadoop event in NYC.

ABSTRACT
Healthy ecosystems with intact biodiversity provide human societies with valuable services such as clean air and water, storm protection, tourism, medicine, food, and cultural resources. Protecting this natural capital is one of the great challenges of our era. Species extinction and ecological degradation steadily continues despite conservation funding of roughly U.S. $20 billion per year worldwide. Measurements of conservation outcomes are often uninformative, hindering iterative improvements and innovation in the field. There is cause for optimism, however, as recent technological advances in sensor networks, big data processing, and machine intelligence can provide affordable and effective measures of conservation outcomes. We present several working case studies using our system, which employs deep learning to empower biologists to analyze petabytes of sensor data from a network of remote microphones and cameras. This system, which is being used to monitor endangered species and ecosystems around the globe, has enabled an order of magnitude improvement in the cost effectiveness of such projects. This approach can be expanded to encompass a greater variety of sensor sources, such as drones, to monitor animal populations, habitat quality, and to actively deter wildlife from hazardous structures. We present a strategic vision for how data-driven approaches to conservation can drive iterative improvements through better information and outcomes-based funding mechanisms, ultimately enabling increasing returns on biodiversity investments. 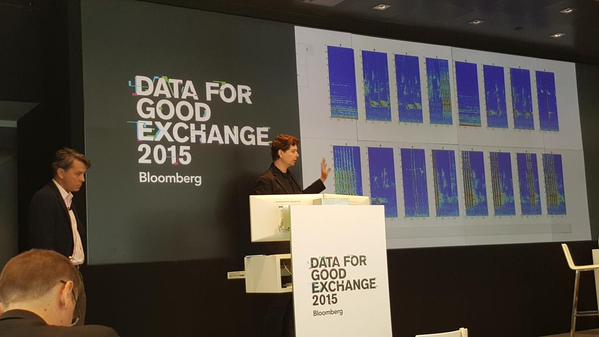 Bowheads are the only whales with a varied repertoire of elaborate and complex songs that they share during a single migration season. Click the soundcloud link in this article to hear for yourself!

These songs were recorded by deploying sonobuoys, “sphere-shaped devices somewhat resembling exercise balls, that can stay on the surface of the seafloor for six months and return to the surface when sent an electronic signal.”

Conservation Metrics Senior Analyst, Abram B. Fleishman, gave a great lecture on one of our projects at the Pacific Seabird Group conference this week. You can read the abstract here (page 42): https://www.pacificseabirdgroup.org/2015mtg/PSG2015_Abstracts.pdf

Many of us at CMI have found inspiration in Alfred Russel Wallace’s journey and accomplishments. This year we were able to learn more, and honor his life with brilliant lectures by esteemed scientists, while celebrating the 100th anniversary of his death at UCLA’s Wallace Symposium. You can read more about Wallace and the event at the link below… and see some of our photos from the conference (attached):

Last year CMI was involved in monitoring populations of rare native species at Kilauea Point National Wildlife Refuge on Kaua’i to measure outcomes for the building of this predator-proof fence. Now, we’re excited to see that the fence has been completed and restoration progress is moving forward!
https://www.abcbirds.org/newsandreports/releases/141201.html